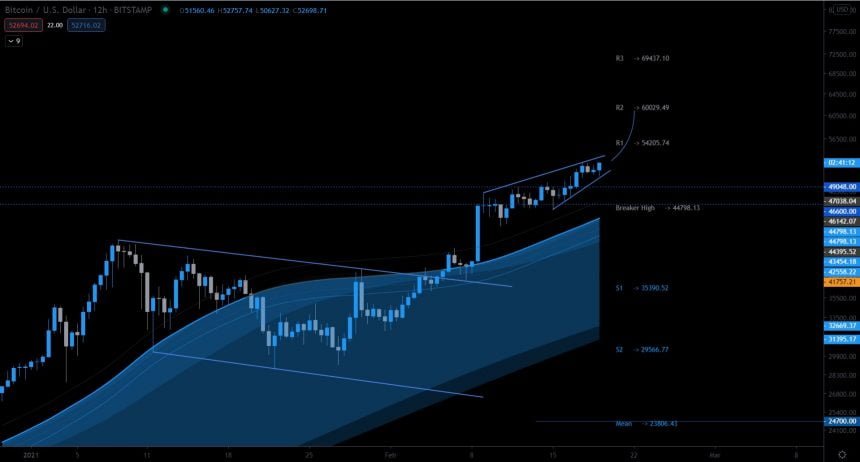 Bitcoin bulls are not running out of fuel.

On Friday, traders once again raised their bids for the world’s leading cryptocurrency, sending its prices to another record peak after Grayscale Investments, a New York-based crypto investment vehicle, added 1,672 BTC to its already-ballooning bitcoin stockpile. The firm now holds 655.44 BTC, worth almost $33.5 billion.

In a note published Thursday, analyst Ben Lilly highlighted that bitcoin investment made by Grayscale, Tesla, MicroStrategy, Ruffer Investments, Square, Bitwise, and other firms sucked more of the cryptocurrency out of supply than produced. Meanwhile, retail traders withdrew Bitcoin en masse from exchanges, adding further to the brewing liquidity crisis.

“It means bitcoin is in fact becoming scarce,” Mr. Lilly stated. “If this continues, a liquidity crisis will transpire pushing prices considerably higher.”

Bitcoin At Another Top

The BTC/USD exchange rate topped at $52,875 during the early London session after rallying 2.48 percent into the day.

The pair pared a modest portion of its gains later, falling to as low as $52,619 but maintained its upside bias above crucial technical supports. That, coupled with falling Bitcoin reserves across all the exchanges, raised the cryptocurrency’s potential to log an extended bull run in the sessions ahead.

The spike already led BTC/USD up by 85 percent this year. Meanwhile, the move extended the pair’s net rebound from the March 2020 lows of $3,858 by more than 1,260 percent, making Bitcoin one of the world’s best-performing global assets during the coronavirus pandemic.

The CEO of CryptoQuant—a South Korea-based blockchain analysis firm, noted that the latest Bitcoin bull run appeared despite a negative Coinbase premium. It means that stablecoin whales and retail investors drove the prices upward, which tends to have shorter risk timeframes than institutional investors.

Nevertheless, analysts with a bias towards technical patterns believed Bitcoin would continue its upside. A pseudonymous trader noted that the cryptocurrency could hit $60,000 in the near-term after breaking out of a bull flag. It is a bullish continuation pattern.

“It seems BTC has more gas left in the can. Bull flag breakout target around $60k being given added confluence by BPRO TP2 also given around there.”