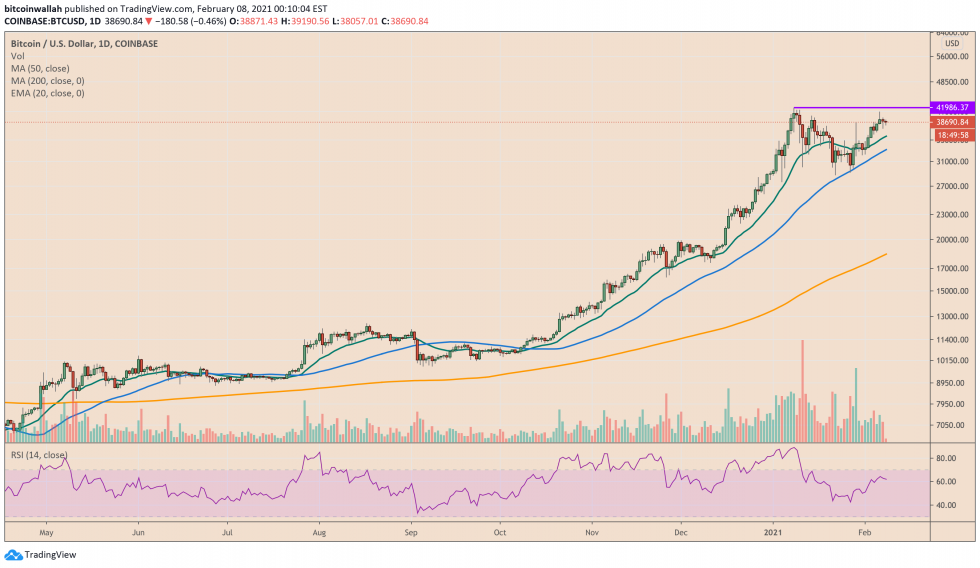 It happened last weekend. Bitcoin managed to close above $40,000 for the third time since January 8. But again, the benchmark cryptocurrency got bull-trapped by daytraders who sold off the said level to secure short-term profits.

As a result, Bitcoin opens the new week in a negative area, with traders still assessing its short-term market bias against a basket of macro fundamentals, primarily a recent uptick in the US 10-year yields above its January 11th peak. Sell-off in bond markets typically weigh negatively on safe-haven assets—like Bitcoin and gold, generally non-yielding. 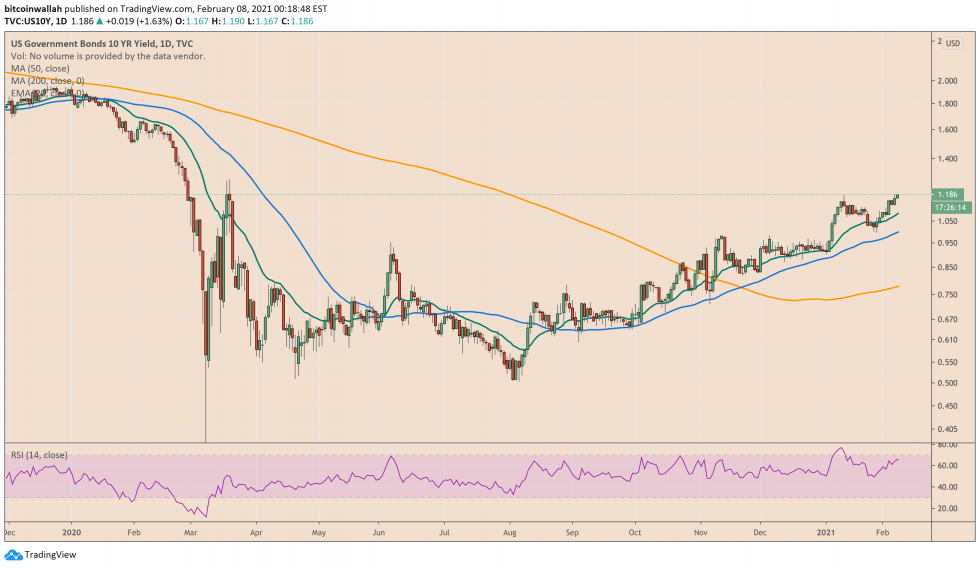 The yield on the US 10-year note is rising. Source: US10Y on TradingView.com

But traders in the cryptocurrency space expect larger upsides. That is due to the Federal Reserve’s decision to keep its benchmark interest rate near zero until 2023 and buying government and corporate debts at a rate of $120 billion per month until the economy achieves maximum employment.

Meanwhile, analysts note that US President Joe Biden’s $1.9 trillion coronavirus package would put downside pressure on the US dollar. In turn, the aid would push investors seeking protection against the greenback-led consumer price inflation, thus pushing the Bitcoin prices higher.

The stimulus package of $1.9 Trillion is 3 times larger than the entire #Bitcoin market capitalization.

So far, inflation expectations have poured cold water on the safe-haven rallies.

A rise in benchmark yields pressured gold prices lower as it marked a renewed risk-on optimism in the market.

Investors instead poured capital into the risk-on assets, sending the US benchmark S&P 500, blue-chip Dow Jones, and tech-savvy Nasdaq Composite up by 4.65, 3.89, and 6.01 percent last week, respectively, following a stronger economic recovery projection for the US.

Bitcoin too surged in the same timeframe, but its rally took cues from a speculative mania triggered by Tesla and SpaceX founder Elon Musk’s open endorsements. The cryptocurrency reached $40,000—as discussed above—but only briefly, pointing to bullish uncertainties that lie above the said resistance level.

Bitcoin slips back below $40,000 after a brief run-off. Source: BTCUSD on TradingView.com

The cryptocurrency enters the new weekly session carrying a similar bias conflict. What will be the key to watch ahead is the performance of longer-dated Treasury yields, which have been trading upwards. Last week, the 30-year rate finished at its highest level since February 20, 2020. Meanwhile, a US dollar further poses downside risks for Bitcoin.

Event-wise, the week ahead looks quiet, with the Chinese new year taking exchanges offline starting Thursday. Meanwhile, the US will release its inflation figures on Wednesday (a higher reading expects to send bond yields further higher). That will be followed by the University of Michigan’s consumer sentiment report on Friday.