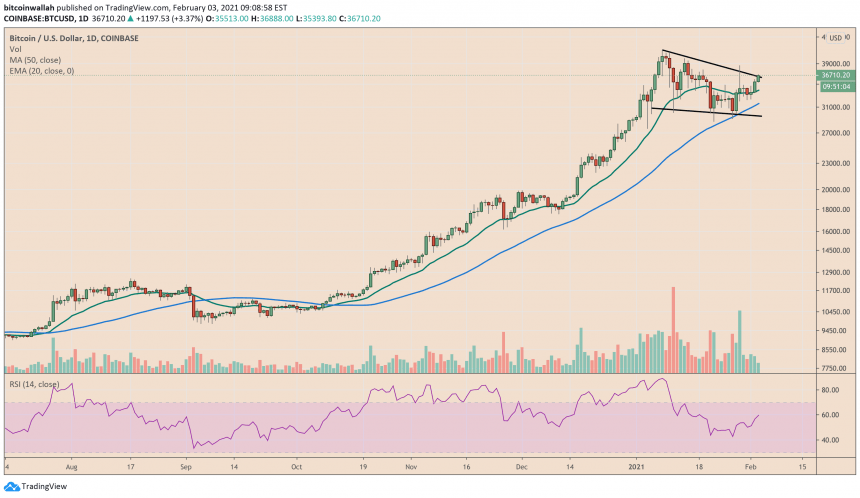 Cryptocurrency exchanges experienced a dramatic rise in stablecoin deposits in the previous 24 hours, instilling hopes that traders will use the dollar-pegged tokens to purchase Bitcoin.

Data fetched by blockchain analytics platform, CryptoQuant, showed exchanges’ stablecoins reserves hitting a record high of 5.47 billion after adding $600 million in a day. The spike apprehensively coincided with a modest upside move in the Bitcoin market, wherein the BTC/USD exchange rate rose by almost 3 percent to hit an intraday high of $36,888.

The latest gains came as a part of a broader recovery move that saw Bitcoin rebounding from its January low of $28,732. Before that, the cryptocurrency had crashed by almost 30 percent from its record high levels near $42,000.

Analysts now see the rally as a bullish continuation setup, wherein an asset resumes its uptrend after a brief/prolonged period of consolidation. The ones with technical trade expertise note that Bitcoin is forming a Falling Wedge pattern that typically leads to a full-fledged breakout to the upside.

A descending wedge or a triangle, it looks like we could have a pull-back from that resistance line. If not, it would be a rather bullish sign, at least short-term.
(The S/R zone at $34k as well.)$BTC $BTCUSD #bitcoin pic.twitter.com/xIc249IwbX

The upside sentiments serve as the primary reason people have upped their stablecoin deposits across all the cryptocurrency exchanges. Pegged to the US dollar, stablecoins enable traders to buy/sell a crypto asset speedily.

Therefore, many analysts see a higher stablecoin inflow as a sign of a brewing bullish momentum across the cryptocurrency market, including that of Bitcoin.

First, payment processing giant Visa has revealed its plans to assist banks in setting up bitcoin-enabled trading services. The move expects to further push the cryptocurrency market into the mainstream, including half the world’s population that uses Visa-enabled credit and debit cards.

Second, Guggenheim Partners’ chief investment officer Scott Minerd predicted that the Bitcoin price could hit a $600,000 valuation. Speaking to CNN, the asset manager stated that the cryptocurrency would eventually steal a portion of gold’s market cap to reach higher valuations. Traders perceive both as hedging assets against inflation.

“We did a lot of fundamental research, and if you consider the supply of Bitcoin relative, let’s say, to the supply of gold in the world, and what the total value is, if Bitcoin were to go to this kind of numbers, you’d be talking about $400,000 to $600,000 per Bitcoin,” — said Mr. Minerd.