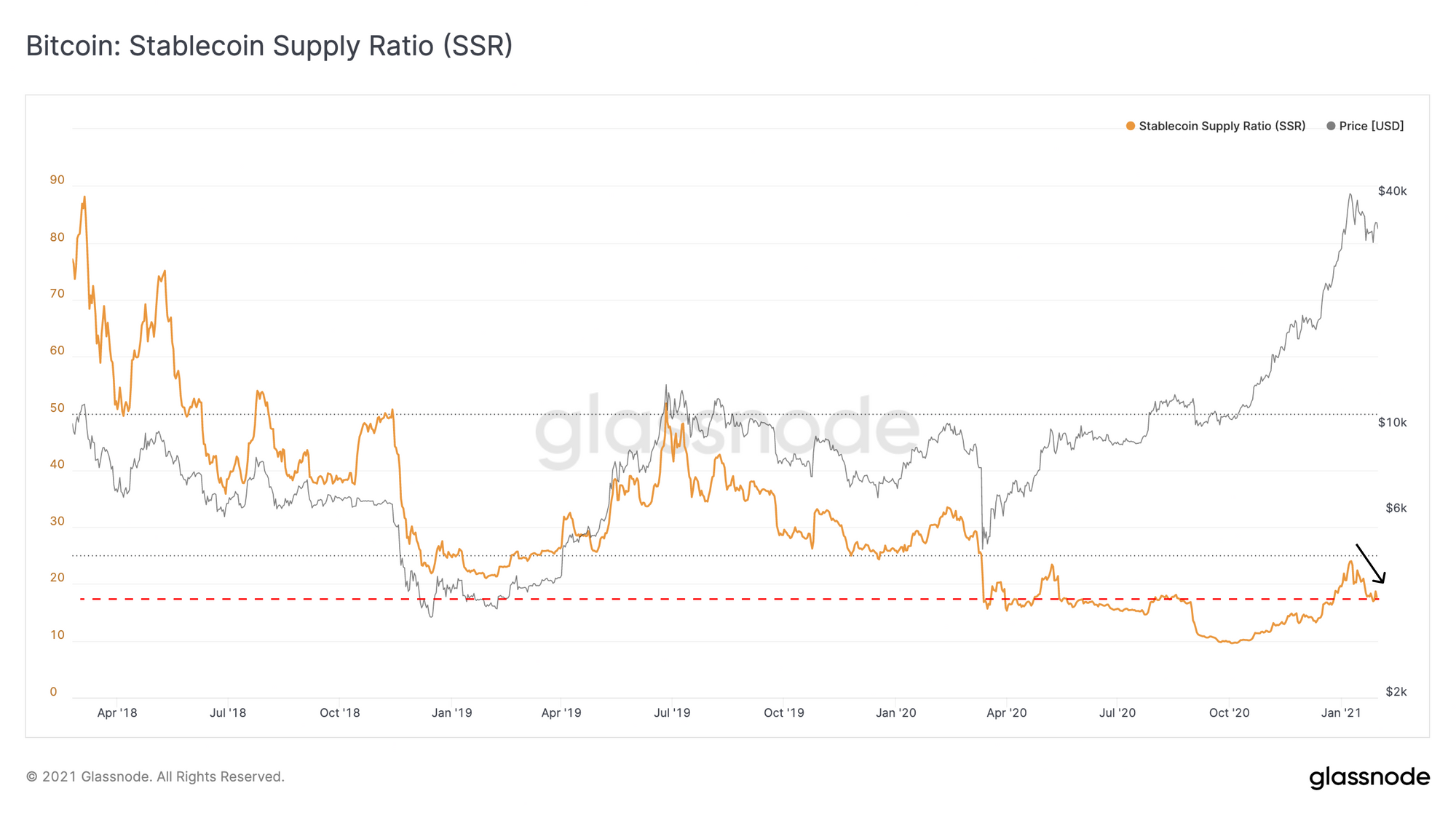 Bitcoin and Ethereum have sliced through a critical resistance level that kept their prices at bay over the past three weeks. Now that buying pressure is picking back up, these cryptocurrencies face little to no obstacles ahead that would prevent further advances.

Bitcoin Bulls Get Back in Control

Bitcoin has endured a month-long consolidation period that began after prices peaked at an all-time high of nearly $42,000 on Jan. 8. Since then, BTC made a series of lower highs while the $30,000 support continued to reject it from a steeper pullback.

Such market behavior has formed a descending triangle on Bitcoin’s 1-day chart.

A recent spike in the buying pressure was significant enough to push BTC through the triangle’s hypotenuse. Moving past this hurdle has drastically increased the odds for a 30% upswing towards $45,000.

This target is determined by measuring the distance between the widest range of the triangle and adding it to the breakout point.

IntoTheBlock’s In/Out of the Money Around Price (IOMAP) model reveals two supply barriers ahead of Bitcoin that might prevent it from achieving its upside potential.

These supply walls may have the ability to absorb some of the buying pressure seen recently. Holders who have been underwater may try to break even on their positions, slowing down the uptrend. But if Bitcoin can slice through these hurdles, it would likely climb to $45,000.

Given the strength of these demand barriers, only a daily candlestick close below $32,000 will invalidate the bullish outlook and lead to a steep correction.

Ethereum made headlines after it broke decisively through the $1,400 resistance level. The bullish impulse was significant enough to encourage market participants to buy more ETH in anticipation of higher highs.

As buy orders piled up across multiple cryptocurrency exchanges, ETH was able to break out of an ascending triangle where it had been contained over the past three weeks.

Now that Ethereum has entered price discovery mode after rising to a new all-time high of $1,550, the chances for another 22% surge to $1,900 have drastically increased. This target is defined by measuring the distance of the triangle’s y-axis and adding it to the x-axis.

IntoTheBlock’s IOMAP model estimates that $1,330 plays a crucial role in Ethereum’s trend. Transaction history shows that this is the largest demand barrier underneath this altcoin that could hold prices in the event of a sudden correction.

Here, nearly 157,000 addresses had previously purchased 6.60 million ETH. This area could absorb some of the selling pressure if ETH’s breakout gets rejected.

That said, it would be catastrophic for those betting to the upside if the $1,330 support level breaks. The IOMAP cohorts show that the next significant support level reinforcing Ethereum’s uptrend sits around $1,200.

Therefore, ETH holders should expect their investments to plunge by 10% if the $1,330 support breaks.

Though uncertainty reigns after the pump and dumps seen over the past week, it seems like Bitcoin and Ethereum are primed for higher highs.

The Stablecoin Supply Ratio (SSR) indicator has been steadily declining since the beginning of the year as more stablecoins are minted to meet the market’s demand.

A low SSR is indicative of mounting buying power ready to flow into the cryptocurrency market.

“SSR decreases when the price of BTC is low or when more stablecoins are entering circulation. The fact that SSR is so low even as Bitcoin maintains high prices demonstrates just how many new stablecoins have entered the ecosystem recently,” said Glassnode.

As more stablecoins get deposited into exchanges, it signals that investors are preparing to buy up cryptocurrencies such as Bitcoin and Ethereum.

If this is the case, FOMO might kick in as soon as BTC regains $40,000 as support triggering a new uptrend across the entire cryptocurrency market.

Disclosure: At the time of writing, this author owned Bitcoin and Ethereum.