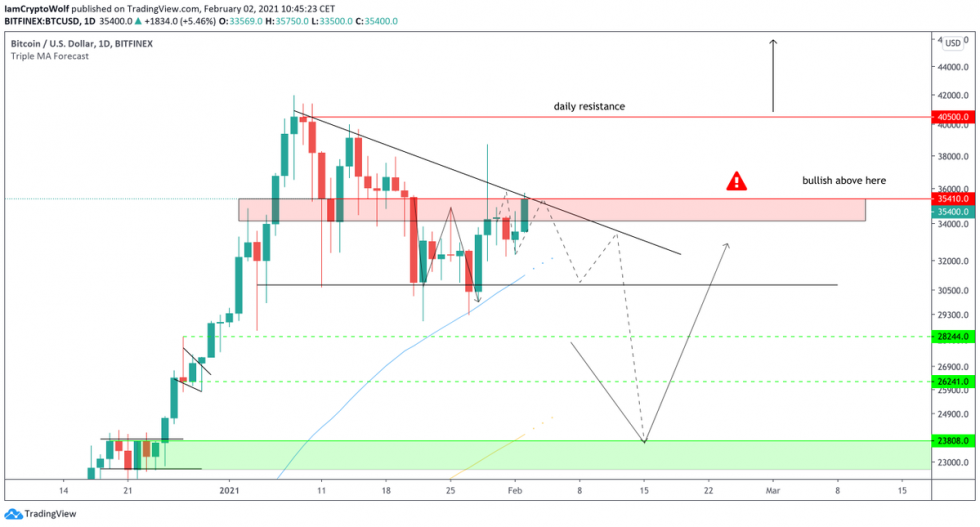 Bitcoin and the entire crypto market have seen mixed price action as of late, with both bulls and bears being unable to gain any clear control over the crypto’s price action.

Buyers have been showing some signs of vitality as of late despite a bearish sentiment across social media, which could mean that an upwards expansion phase is coming.

For this possibility to be confirmed, bulls must shatter one key resistance level that has been holding strong throughout the past few days and weeks.

At the time of writing, Bitcoin is trading up just under 4% at its current price of $34,720, which marks a notable rise from recent lows of $29,000 that were set last week.

The crypto has been rising ever since it broke below $30,000, which has continued to be a bedrock support level for the cryptocurrency.

BTC rejected last night at a key level that analysts have been watching for quite some time. A continued downtrend could signal that significant losses are imminent.

Analyst Claims BTC Still Has Yet to Break Key Resistance

Despite the strength seen overnight, analysts are now noting that Bitcoin could be poised to see further downside.

One trader explained that he is bearish until BTC breaks above a trendline that was tested during the overnight pump. He anticipates a move down to the low-$20,000 region in the mid-term.

The coming few days should provide some serious insight into where the aggregated crypto market will trend in the mid-term, as it all depends on Bitcoin.