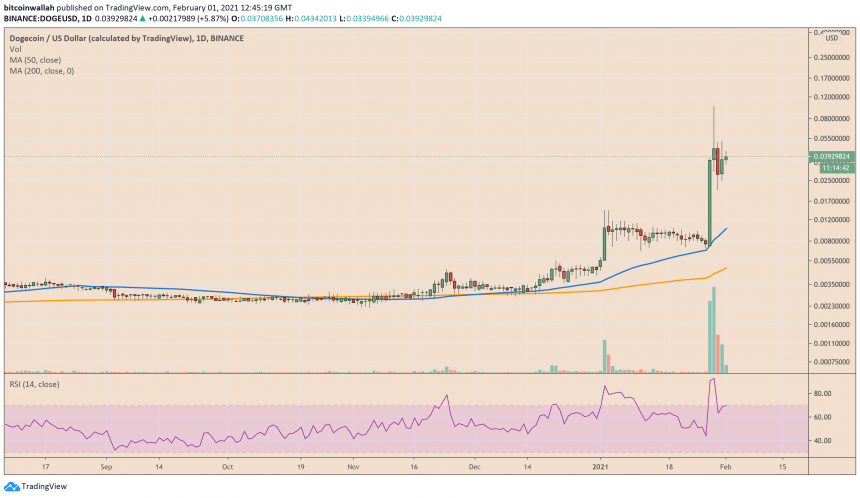 Ripple is back at the center of attention of the cryptocurrency community after a group of Redditors responsible for pumping failed stocks of GameStop and AMC Corporations choose to orchestrate the same buying frenzy for the blockchain firm’s native token XRP.

The last four days have witnessed the XRP/USD exchange rate jump from $0.23 to as high as $0.77—a 228 percent rally. The pair’s gains pushed the XRP’s market capitalization to $32 billion at one point in time, making it the fourth most valuable cryptocurrency in the space.

As of Monday, the Ripple token was correcting lower, led by profit-taking sentiment. Its price against the dollar fell by 22.42 percent during the Asian and European session, leaving exposed traders with two options: Either repurchase it at the local lows or exit altogether after securing remaining profits.

What has worked in favor of Ripple is no underlying fundamental but WallStreetBets, a Reddit group that is on a mission to send rich hedge funds into losses. Their recent stint in the $43 trillion US stock market rallied the most-shorted stocks, forcing Melvin Capital to close its bearish positions with more than 53 percent of its capital wiped.

The cryptocurrency community, known for its anti-establishment views on global finance, has eyed WallStreetBets as their cue to orchestrate similar mob-led bullish frenzies.

Dogecoin, a meme cryptocurrency that practically has no reason to exist but to make jokes about the crypto sector, jumped more than 1,100 percent in a copycat rally. Nevertheless, its price quickly crashed by as much as 79 percent from its latest high of $0.01.

The joke token still has not given up on its bullish dreams. After settling a low near $0.02 on Saturday, it corrected back to the upside by more than 100 percent. It is now consolidating sideways—just like XRP—with its traders choosing whether to pump it higher or dump it lower.

But the Ripple token is still to see its red candle. Only unlike Dogecoin, it has some bullish news to continue its upside moves.

For a little background, the San Francisco firm is facing a lawsuit filed against it by the Securities and Exchange Commission. The US securities regulator alleged in December that Ripple Labs, its CEO Brad Garlinghouse, and co-founder Christian Larsen sold over 14.9 billion XRP units, which it unregistered security, for about $1.38 billion.

XRP/USD lost half of its value after the court filing, with many top exchanges, including Coinbase and Binance, choosing to delist it until further notice.

On January 29, Ripple Labs officially responded to the SEC complaint, alleging that the regulator is out of its jurisdiction because the US Department of Justice and the Financial Crimes Enforcement Network (FinCEN) have already confirmed that XRP is not a security.

“Basically, on its way out, the Trump administration sought to undo the determination that XRP was a virtual currency made during the Obama administration,” the company added.

While the verdict is still unclear, the response may have helped fuel the Ripple rally. The token still remains overbought on all accounts and could risk a technical correction. Analyst Michaël van de Poppe thinks the next buying opportunity is when it trades in the range of $0.45-$0.50 but risks of longing XRP remains higher.

“Avoid chasing pumps on DOGE and XRP,” he added. “Determine the levels where you might going for an entry for a scalp trade to reduce your potential risk.”