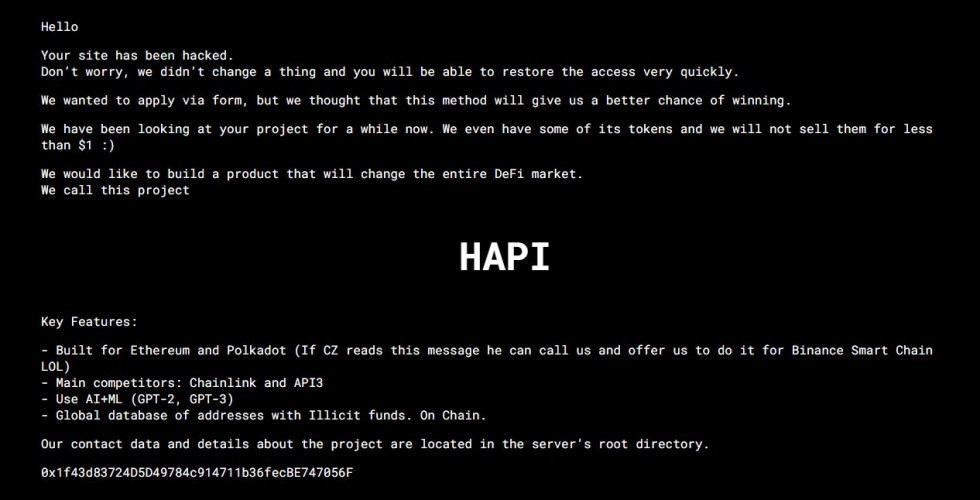 Community members of the cybersecurity company Hacken recently launched the First Grey Hat Hackers Ideas Competition. The competition website itself was later hacked. After the hack, those behind the breach used their access to leave a message announcing a new DeFi project along with more information for the Hackathon’s organizers. Here’s all you need to know about the world’s first Grey Hat hacker built DeFi project.

Hacken community organizer Leo Andreo launched the First Grey Hat Hackers Ideas Competition on January 19, inviting world-class hackers with grey hat ideas that can be turned into sustainable businesses. The prize pool is worth up to 45,000 USDT.

Within a week, the First Grey Hat Hackers Ideas Competition site was hacked. Those who infiltrated the website were clearly skilled and used their expertise to leave a message to the Hackathon’s organizers. The message included the project’s name along with more information on how to get in touch. But the message, in essence, was that these hackers had something special the world must-see.

The project itself is called HAPI and is built for both Ethereum and Polkadot blockchains. Hacken CEO Dyma Budorin later set up a conversation with the hackers to find out more. In an official statement, they revealed:

“We have helped our community restore the work of the site. That has not been a typical hacking. The hackers have decided to present themselves and apply for participation in the Hackathon in such a way. We have contacted them to clarify the project’s details. Although we do not support hackings, the project in question devotes attention. We suggest that the project has the potential to have an impact on the further development of the DeFi market.”

Budorin took to Twitter to reveal the hack, stating:

that’s exactly what was asked for.” The hackers claim that the project “will change the entire DeFi market.”

Decentralized finance is a disruptive new technology, relying on cryptocurrency tokens for the purpose of lending, borrowing, and much more. It is poised to replace many facets of traditional finance and the archaic banking system. Hacken utilizes cutting edge blockchain technology to protect users from hackers and other cybersecurity threats. For more information about Hacken, visit the company’s website. You can also learn more about the First Grey Hat Hackers Ideas Competition by visiting ihktn.com.