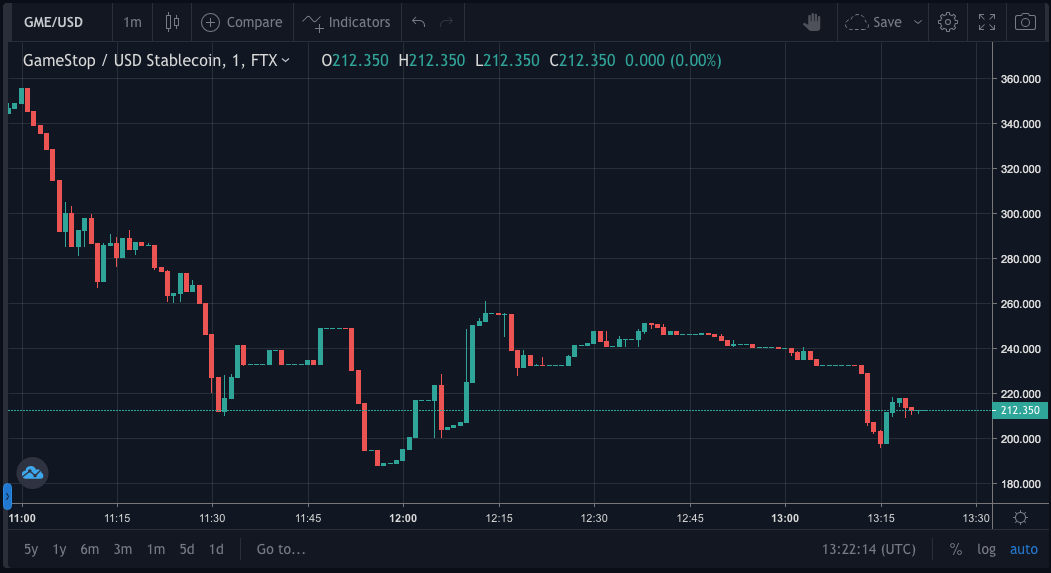 Since Melvin Capital revealed it had closed its position, tokenized GameStop Stocks (GME) are tanking on FTX. The popular exchange is facilitating trading on tokenized stocks and futures.

The biggest story on the markets this week just took another turn.

Tokenized GME stocks and futures are plummeting on the news that Melvin Capital has closed its short position on GME. Tokenized stocks on FTX dropped from $355 to $188 as the news broke. They’ve since recovered to $212, resulting in a 37% retrace today.

Earlier this morning, CNBC broke the news that Melvin Capital had closed its short position on GME, suffering substantial losses.

This week, it was announced that the firm would receive a bailout to the tune of $2.75 billion from Citadel and Point72 in response to the market action affecting GameStop stocks.

The Wall Street firm was among the biggest participants in a short bet placed on GME.

Earlier this month, the stock soared 50% on the news that Chewy founder Ryan Cohen and two associates had been appointed to the company’s board. The price surge led Melvin Capital and other big institutional players to take short positions on GME.

The hedge firm’s moves were identified by a group of Reddit users on the subreddit /r/wallstreetbets, who colluded to organize a short squeeze by pumping the price of GME. The markets hit a frenzy yesterday as GME saw a 92% gain, closing the day at $147.98. It’s up more than 680% this month.

FTX, a cryptocurrency derivatives exchange run by Sam Bankman-Fried, listed futures and tokenized stocks for the asset due to the wild market action. FTX has been known for listing products like this in the past; recently, it listed Airbnb before the company went live on Nasdaq.

But when CNBC announced that Melvin Capital had thrown in the towel by closing their position, prices heavily dropped. The tokenized stocks are now down 37%, while futures are 40% in the red.

“We hope that over time ‘stocks’ can become a mature asset class so serious investors can participate in,” a tweet from FTX read.

Galaxy Digital founder Mike Novogratz also took to Twitter to discuss the events today, stating that the short squeeze was “a giant endorsement of DeFi.”

1)This GME squeeze is deeper than a squeeze. its a large group of people saying they don’t want Citadel preying on their orders from RH, they don’t want IPO’s being allocated to insiders, they don’t like a system geared to the already rich.This is a giant endorsement of DEFI.

The New York Stock Exchange opens at 09:30 Eastern Time. The latest activity could be another eventful day for GameStop and the Reddit army behind the drama.