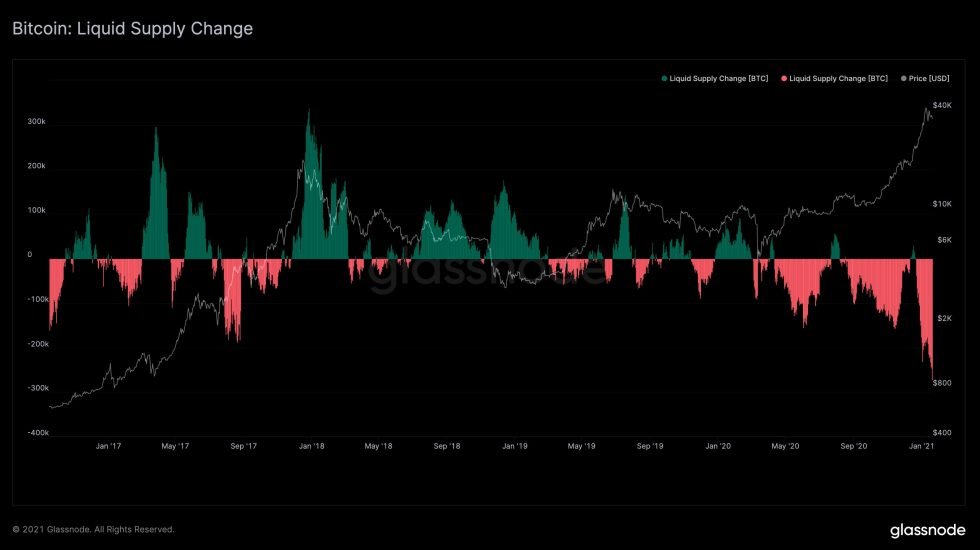 Bitcoin could hit $50,000 in the coming sessions as more and more institutions accumulate it against their fears of dollar-linked inflation.

The flagship cryptocurrency, whose market capitalization recently soared above that of Facebook and Tesla, dropped lower from its record high near $42,000. Nevertheless, its plunge prompted rich traders and institutions to purchase it at cheaper rates, leading to further liquidity crunch against its limited supply cap of 21 million tokens.

As a result, the bitcoin price is mostly consolidating sideways, forming a structure that looks like a Symmetrical Triangle. In retrospect, the said pattern develops when the price forms higher lows and lower highs. Meanwhile, the trading volume drops. Ultimately, the price breaks out in the direction of its previous trend—upward or downward.

Bitcoin’s previous trend was bullish. Therefore, the cryptocurrency’s possibility of notching another upside run is higher on its breakout move out of the Triangle pattern. That should take its price above $50,000.

That is—again—because of a Symmetrical Triangle’s textbook description. An asset breaks out by as much as the maximum height between the pattern’s upper and lower trendlines. In Bitcoin’s case, the height is around $14,000. 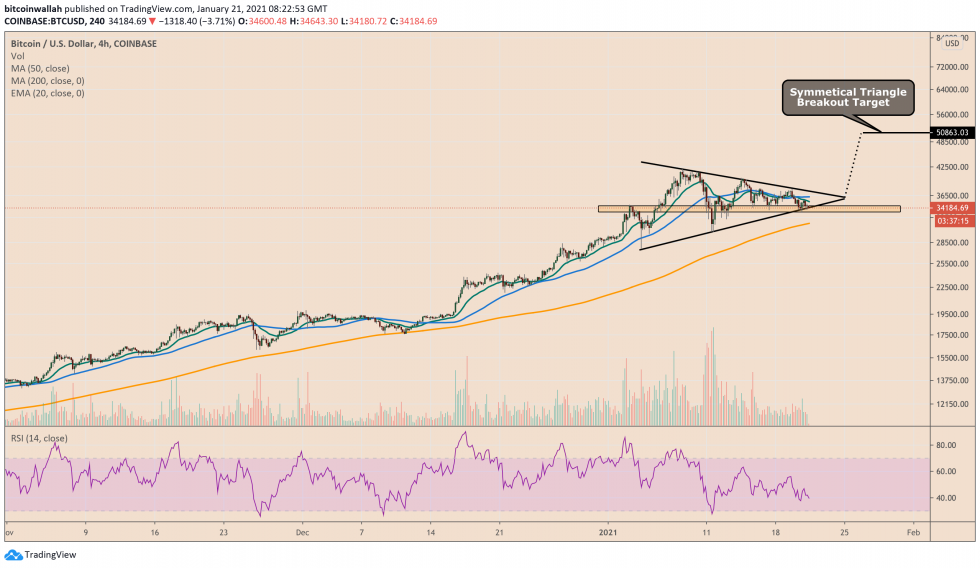 A move above the Triangle, coupled with a rise in volumes, expect to take the bitcoin price above $50,000.

Fundamentally, the price target looks achievable, at least according to a plethora of analysts that determine their market bias based on on-chain indicators. For instance, data analysts at Glassnode highlighted Bitcoin’s largest liquidity depletion to date in recent weeks, hinting that its bullish for the cryptocurrency.

“Not only are funds being withdrawn from exchanges, but coins are continuously moving to strong hands,” they stated. “In the past 30 days, around 270,000 BTC moved to entities considered HODLers.”

“The [Glassnode] chart might be more important than the price chart: bitcoin supply is being withdrawn from exchanges at an all-time-high pace,” added Luke Martin, an independent market analyst. “Historically, bull cycles have ended AFTER liquid supply change flips positive. That flip has not happened yet.”

Part of the reason is a comparative higher demand for Bitcoin amid an ongoing anti-inflation narrative. Joe Biden’s escalation to the US presidential seat has increased the prospects of additional government spendings to safeguard the economy from the aftermath of the coronavirus pandemic.

That means an abundant dollar supply which many perceives as bearish for the greenback.

Such fears have already pushed companies like MicroStrategy and Square to exchange a portion of their dollar reserves for Bitcoin. Meanwhile, legendary investors such as Paul Tudor Jones and Stan Druckenmiller have also invested small sums into the cryptocurrency market, with both believing it to be the better version of gold.