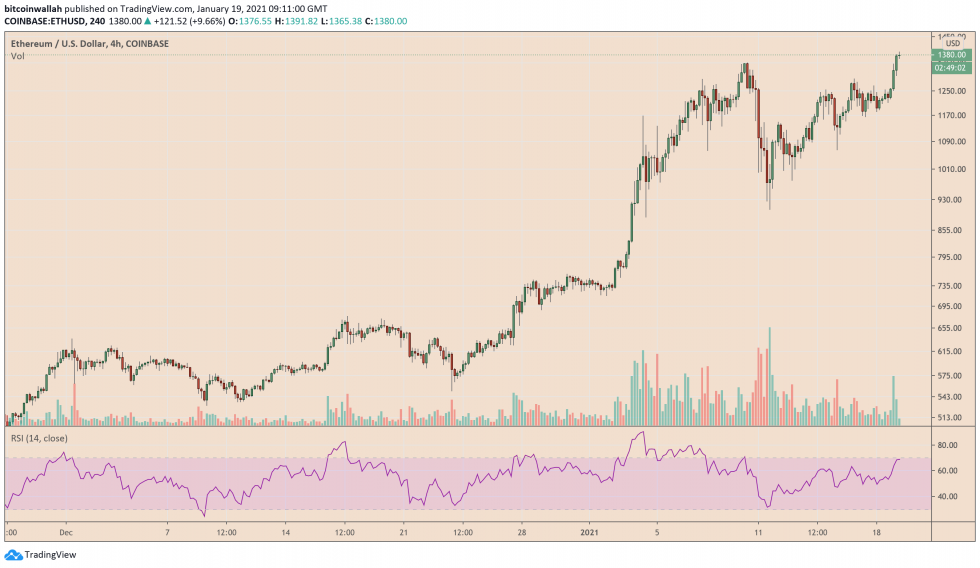 The second-largest cryptocurrency (by market cap) surged by roughly 10 percent on Monday to hit an intraday peak level of $1,391.82.

Its rally appeared in absence of any concrete catalysts, prompting observers to call the move entirely speculative. Meanwhile, some also noted that the coin merely benefited from a lack of wild fluctuations in the Bitcoin market that open attractive intraday opportunities for long/short traders.

I wouldn't mind if $ETH doubled after the ATH like $BTC did.

The top cryptocurrency went on a corrective course after setting a record high of $41,986 on January 8. After a 30 percent decline, it started consolidating sideways, with each extension leading to dimming volumes and low volatility. Traders typically use the Bitcoin’s consolidation phase as a cue to long the altcoin market, leading to beginning of the so-called “altseason.”

“ETH/BTC retesting highs of current movement and sitting over .033 sats level Current level acted a strong resistance over the last 4/5 months, so looking for a flip and straight continuation to the 2020 highs (~20%),” said independent analyst Nico. “Overall, looks good and altseason can’t happen without ETH.”

To many, Ethereum’s upside move is also an effort to reach its January 2018 high of $1,419. Economist Alex Krüger envisioned the ETH/USD rates hitting $2,000 in the coming sessions. He tweeted:

The upside predictions also appeared in the wake of Ethereum’s long-term bullish prospects owing to a plethora of supportive fundamentals. They include the booming decentralized finance projects that operates atop the Ethereum blockchain, thereby increasing ETH adoption, and its switch from proof-of-work to proof-of-stake (read ETH 2.0) that effectively puts a considerable ETH supply out of circulation.