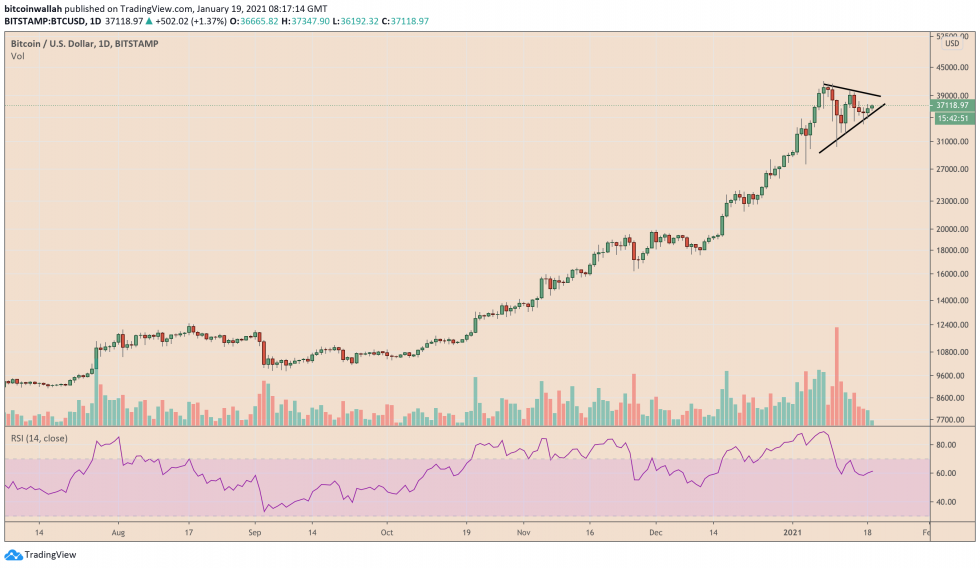 Bitcoin started the new week on strong note, finishing higher on Monday amid speculative bets against Treasury secretary nominee Janet Yellen’s confirmation hearing in Washington, where she will make a case for large-scale fiscal budgets to cushion the economic fallout led by COVID-19.

The flagship cryptocurrency, which has earned itself the tag of “digital gold” for its anti-inflation similarities with the yellow metal, surged 2.23 percent to finish near $36,616 on Monday. Its upside move matched trends in the US stock market, where the S&P 500, the Dow Jones, and the Nasdaq Composite indexes all rose in tandem.

In the past four years, the US administration has pushed its debt load by almost $7 trillion, bringing the total amount to near $21.6 trillion. President-elect Joe Biden plans to boost government spendings by at least a trillion dollar. The move would put the US economy in lines with other debt-struck economies such as Greece, Japan, and Italy.

Ms. Yellen supports the dovish policy, arguing that the US “risked a longer, more painful recession” and “long-term scarring” if it didn’t launch expansive fiscal stimulus.

“Neither the president-elect, nor I, propose this relief package without an appreciation for the country’s debt burden,” Ms Yellen said, according to her prepared remarks witnessed by the Financial Times.

“But right now, with interest rates at historic lows, the smartest thing we can do is act big. In the long run, I believe the benefits will far outweigh the costs, especially if we care about helping people who have been struggling for a very long time.”

“Just HODL,” the analyst added, referring to the popular slang that asks investors to hold Bitcoin long-term without focusing on short-term price iterations.

So-called real yields on Treasuries—a metric that tracks potential returns from bonds after adjust them with inflation—rose from a record low of minus 1.2 percent to over 0.95 percent.

Analysts including Leslie Falconio, senior fixed-income strategist at UBS Global Wealth Management, expects the yields to go higher. The same happened in the aftermath of Federal Reserve’s tapering tantrum in 2013. Bitcoin could trade these headlines as more and more institutions restructure their portfolios to accommodate higher-yielding debts.