The latest debacle of social media giant Twitter flagging tweets of the US President Donald J. Trump resulted in the draft of an executive order on Preventing Online Censorship. If anything, this highlights one of the core principles behind Bitcoin’s technology – censorship resistance.

The riots in Minnesota’s largest city, Minneapolis, escalated yesterday as entire buildings were set ablaze following the death of George Floyd – an African American who died in police custody.

The President of the country, Donald J. Trump, took it to Twitter to express his thoughts on the matter. He said that the situation demonstrated a “total lack of leadership.”

In a subsequent tweet, however, the President also said that “these THUGS are dishonoring the memory of George Floyd, and I won’t let that happen. Just spoke to Governor Tim Walz and told him that the Military is with him all the way. Any difficulty we will assume control, but, when the looting starts, the shooting starts. Thank you!”.

This latest post, however, was flagged by the social media, and users have to click to read it. 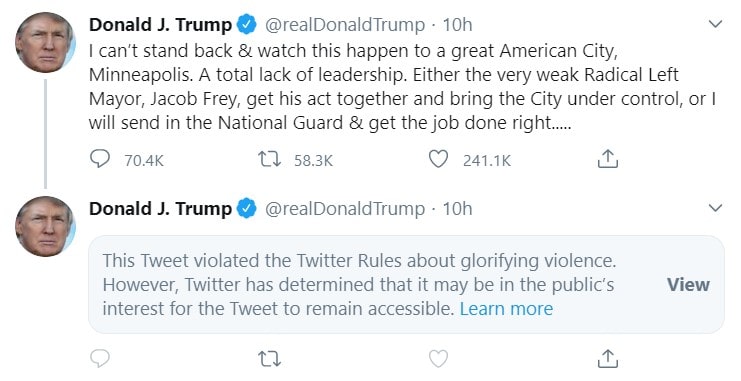 What followed was a series of tweets from President Trump, arguing that Twitter isn’t doing enough to vet posts from various sources and on different matters, including the mistakes of the World Health Organization (WHO), the Russian Witch Hunt Plus, Plus, Plus, and “China’s propaganda,” among others.

Moreover, the President said that the social media “is doing nothing about all of the lies & propaganda being put out by China or the Radical Left Democrat Party.” He argued that it had targeted Republicans, Conservatives, and the President of the United States. He also said that “Section 230 should be revoked by Congress. Until then, it will be regulated!”.

What Trump refers to is Section 230 of the Communications Decency Act, which says:

“No provider or user of an interactive computer shall be treated as the publisher or speaker of any information provided by another information content provider.”

In other words, online intermediaries, such as Twitter, that host or republish speech, are protected against a lot of different laws that might otherwise hold them legally responsible for what publishers on their network say and do.

Yesterday, the White House published a draft of an Executive Order on Preventing Online Censorship.

The document argues that the US “cannot allow a limited number of online platforms to handpick the speech that Americans may access and convey on the internet,” and it’s a representation of Trump’s claims that Twitter has censored his voice.

It claims that such practices are fundamentally “un-American and anti-democratic.”

Twitter’s CEO, Jack Dorsey, also commented on the matter, saying that their “intention is to connect the dots of conflicting statements and show the information in dispute so people can judge for themselves.”

This does not make us an “arbiter of truth.” Our intention is to connect the dots of conflicting statements and show the information in dispute so people can judge for themselves. More transparency from us is critical so folks can clearly see the why behind our actions.

The Power of Decentralization

Regardless of how the whole thing unwinds, the latest fiasco certainly highlights the power behind one of Bitcoin’s core principles – censorship resistance.

The network that Bitcoin is built upon is decentralized. This means that there’s no single authority or entity capable of removing or adding information to it unless it’s what the consensus agrees on.

This also begs the question if the world isn’t ripe for a decentralized social media platform. Whether or not Twitter had the right to flag President Trump’s tweet is irrelevant – the main takeaway is that it can.

Another example came recently from another giant content media sharing platform – YouTube. The site has repeatedly taken down and flagged various cryptocurrency-related content, despite it not being misleading in any way, shape, or form.

Featured image courtesy of The Verge